EDITOR’S NOTE: With the rise of coronavirus, it seems to me that we could all use a little reconnection with our lovely state of Michigan, so I’m going to try to dig out some old photos and share some new ones to help keep you close to Mama Michigan as you socially distance!

This photo originally appeared March 20, 2007 and is one of a nice set titled At the Ice Cave of Eben taken in March of 2007 at the Eben Ice Caves in the Upper Peninsula near Munising. My friend Dr. John Anderton of the Northern Michigan University Department of Geography who has since passed away explained their formation:

The Eben Ices Caves are located just a few miles north of the little town of Eben, within the Rock River Canyon Wilderness Area (RRCW). The RRCW, which became a Wilderness in 1987 as a part of the Michigan Wilderness Act, is located approximately 15 miles west of the town of Munising, MI, within the Munising Ranger District of the Hiawatha National Forest. It comprises 4,460 acres and contains outstanding natural features including Rock River, Silver Creek and Ginpole Lake. Within its interior there are two short user-developed trails (totaling about 1.75 miles) leading to Rock River Falls and the Eben Ice Caves. An estimated 1,700 people visit the area annually (USFS records) …

The Ice Caves are not true caves at all. They consist of walls or vertical sheets of ice that form across the face of overhanging rock outcrops. In the summer, small unimpressive waterfalls and groundwater seeps may found along the overhangs. In the winter, however, the water hits the cold air, drips downward under the influence of gravity and freezes, creating spectacular ice caves. Each winter they look a little different, but typically there are openings in the ice that allow you to walk behind the ice walls.

The rock overhangs, where the ice caves form, consist of outcrops of Munising Formation (Cambrian) with a capstone of AuTrain Formation (Ordovician). The outcrops are found along the south side of the valley of Silver Creek, which is part of a network of secondary glacial drainage channels that formed during the Marquette Advance (about 10,000 years ago). Theses secondary drainage channels flowed easterly into the AuTrain-Whitefish Channel, a primary glacial meltwater channel that flowed south to the Lake Michigan basin. Groundwater naturally seeps from these rocks, providing the water necessary to form the ice caves in the winter.

For directions and more info, check out  Munising Ice Climbing from Travel Marquette! 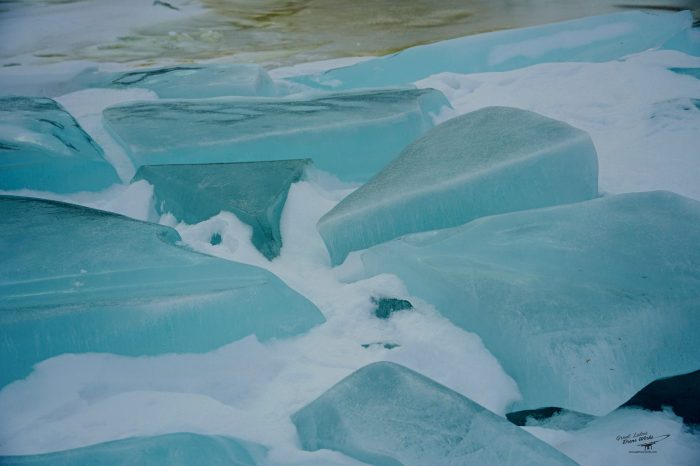 Great Lakes Drone Works captured some awesome shots from the ice on Saginaw Bay near Bay City. They write:

We made our way out to Bay City State Park to capture some images of these huge chunks of ice. At first we were hoping drone photos would be the way to go but after walking around and getting up close, it was clear that ground photography was the better option.
Blue ice occurs when weather conditions — such as a lack of high winds — allow water to freeze slowly and evenly, resulting in ice composed of large crystals (unlike snow, which is formed quickly and made up of small crystals).

When light hits these big ice crystals, it can travel deep into the structures (compare this to snow, wherein light hits a sharp edge and reflects off of it right away, resulting in blinding white). When the light travels deeper into slowly formed ice, some of the red wavelengths of sunlight — which is the longest wavelength of visible light — get absorbed into the ice structure.

The blue, which is the shortest wavelength of visible light, bounces back out, meet our eyes, and results in a deep aqua color.

Head over to their Facebook for more shots and get lots more icy goodness at the ice tag on Michigan in Pictures!

Apparently Charles is my go-to photographer for ice colors as his picture was used for my post about what makes ice blue or green a couple years ago on Michigan in Pictures. Then as now, I went to The Causes of Color to answer the question: What causes the blue color that sometimes appears in snow and ice?

Charles took this photo last week on Sand Point near Munising. Check it out bigger and head over to his Flickr page for a bunch more great shots of winter in the Upper Peninsula!

This is the time of year when I should be sharing pics of bold crocuses, baby birds & other springish things. This being Michigan, we are back to full-on winter!

Chris took this Sunday at the Mackinac Bridge. Head over to his Flickr for more photos of the Mighty Mac and stay warm!! 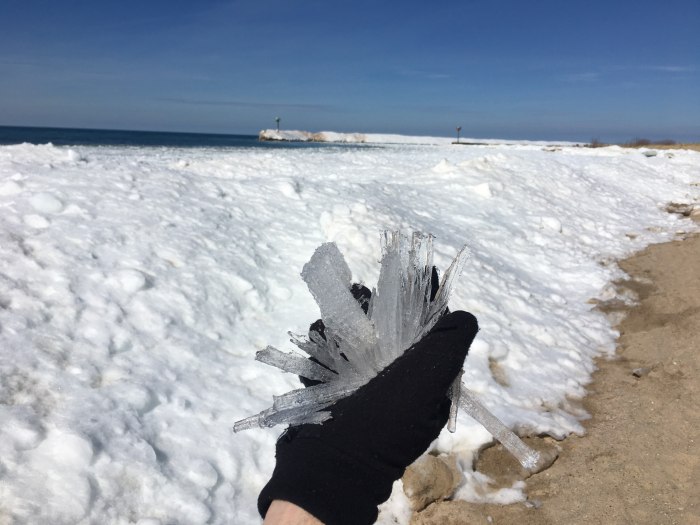 Yesterday my photos and videos of an odd phenomenon on the Lake Michigan shore in Leelanau County got featured by Tanda Gimter on mLive who writes in part:

…some of the ice-crystal creations that suddenly appeared on a Leelanau County beach last weekend had photographers excited about their find – and a little baffled. The large, column-like crystals spread out on the ground like blooming flowers.

When you touched the hand-high columns, they broke apart easily.

“It was just kind of a weird day,” said Andrew McFarlane of Leland, who works in web development and marketing. He took pictures and a couple videos of the phenomenon while he was at Van’s Beach in Leland on Sunday. “I’ve never seen it before that I can remember.”

As regular readers know, I’m not one to let a Michigan mystery alone, and after some research I’m pretty confident that this is called “candle ice”. The American Meteorological Society defines it as: A form of rotten ice; disintegrating sea ice (or lake ice) consisting of ice prisms or cylinders oriented perpendicular to the original ice surface; these “ice fingers” may be equal in length to the thickness of the original ice before its disintegration.

Here’s a video of it! 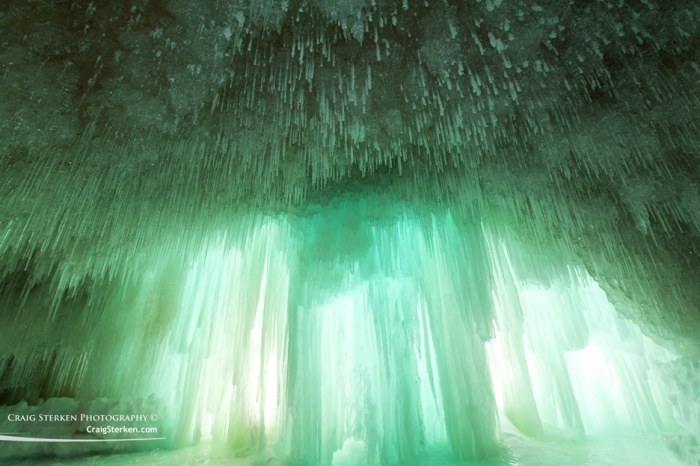 Viewing this ice curtain from the inside at Grand Island near Munising Michigan, highlights the blue and teal hues that nature provides. 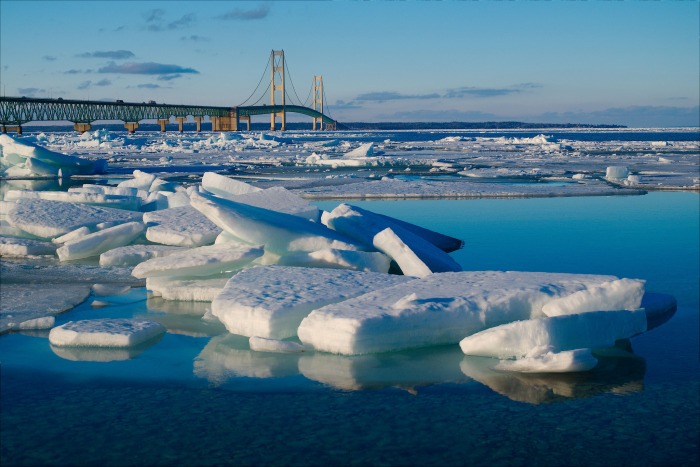 Ice at the Mackinac Bridge, photo by Kent Babb

Winter’s grip on Michigan is slipping early all over including at the Straits of Mackinac.

View Kent’s photo background bigilicious and see more in his photostream on Flickr.

Lots more from the Mackinac Bridge on Michigan in Pictures!

Here’s a shot I took while standing on the amazingly clear ice on Lake Michigan’s Suttons Bay on last Saturday with my sweetheart! mLive liked it enough to share in their article about Grand Traverse Bay freezing over (Suttons Bay is a “sub-bay” of GT Bay – here’s a map):

This winter is the eighth time Grand Traverse Bay has frozen over since 1990.

Grand Traverse Bay is divided neatly by Old Mission Peninsula into its East Arm and its West Arm. Its East Arm runs north of Elk Rapids, while its West Arm includes the popular Power Island and extends to Suttons Bay.  From there, the bay curves around the Leelanau Peninsula where it merges with Lake Michigan.

While lots of people are looking at their gardens and thinking about April showers & May flowers, here’s a reminder from Sunday in Grand Marais that for some in Michigan, winter is still very much in play! 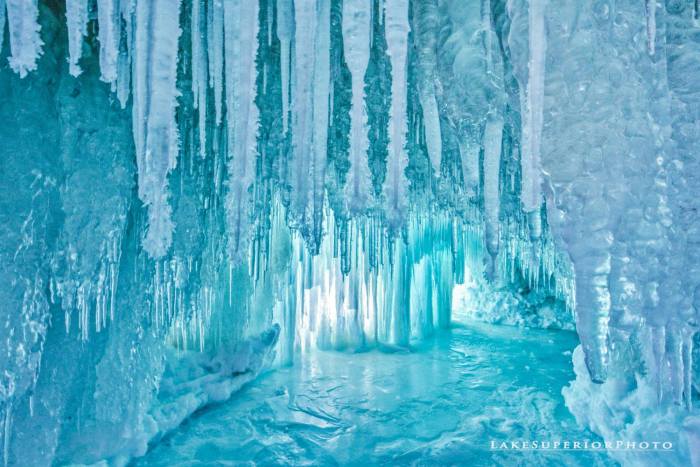 Words escape ME on the beauty of the video that Shawn of Lake Superior Photo shared. The ice caves on Grand Island near Munising didn’t happen this year, a very unfortunate thing for everyone in Michigan who makes their livelihood from winter recreation. However, thanks to the magic of the video below, we can travel back to 2015.

You can view Shawn’s photo from winter of 2015  bigger on Facebook and purchase the photo right here. I can’t stress enough that you should follow Shawn and Lake Superior Photo on Facebook. Please do it.

Now here’s that video. Be sure to turn your volume up and watch in HD – there’s a “boom” from the ice sheet at 4 seconds that’s incredible!