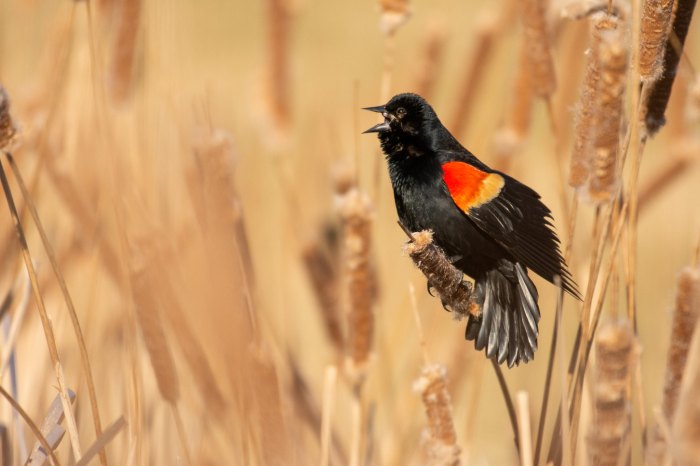 One of my favorite signs of spring in Michigan is hearing the calls of red-winged blackbirds. I started hearing them last week in northern Michigan & just saw these pics today in our Absolute Michigan group on Flickr. The University of Michigan Museum of Zoology’s Animal Diversity Web listing for Agelaius phoeniceus (red-winged blackbird) tells us:

The range of red-winged blackbirds extends from southern Alaska at its northern most point, to the Yucatan peninsula in the south and covers the greater part of the continent reaching from the Pacific coast of California and Canada to the eastern seaboard. Winter ranges for red-winged blackbirds vary by geographic location. Northern populations migrate south to the southern United States and Central America beginning in September or October (or occasionally as early as August). Most western and middle American populations are non-migratory.

This great web resource includes many more photos and blackbird calls. Go there!

Reji TV took this photo near Auburn Hills. See more in their Birds gallery on Flickr.

Snowy Owls are Back by Kevin Povenz

While these arctic owls are not found in the summer, the Michigan DNR shares that Snowy Owls & other winter visitors spend time in our state during the winter months:

Just because the leaves have fallen from the trees and there is a chill in the air is no reason to put away your binoculars. Winter offers unique viewing opportunities. Many of our summer resident birds migrate to warmer summer climates. Still, there are several species of birds that migrate from Canada and find Michigan the perfect winter temperature. Winter is the only time several of these species can be found in Michigan.

Two of the largest migrants are the snowy owl and the great gray owl. Snowy owls can be found moving into Michigan during winter when the food supply on the arctic tundra is in short supply. Snowy owls have been recorded as far south as Lansing, Michigan. Because they rarely see humans on their northern homes, they are not timid and can be easily viewed for long periods of time.

Kevin took this photo back in the winter of 2016, but he’s been hearing that they are back in Michigan now. See more in his Birds of Prey album on Flickr & be sure to follow Kevin Povenz Photos on Facebook.

The Challenge by Charles Bonham

Charles took this shot of a heron trying to show a group of egrets who’s boss near Midland last weekend. Dive into his Flickr for more & be sure to check out his showcase!

American White Pelicans on Lake Huron by kare hav

The photographer writes that it’s hard to believe that there’s pelicans in Michigan, but here they are. In an in-depth Great Lakes Echo feature, Eric Freedman writes that American White Pelicans are expanding their breeding range in Michigan & North America:

The species “is undergoing a dramatic expansion of its breeding range in North America,” the study published in the journal Ontario Birds said. “The nesting on Lake Erie, so far from the colony sites in Lake Michigan and Lake Superior, seems unusual. Why such a large dispersal from the nearest breeding colony 550 km (340 miles) away?”

…That distance “is and is not unusual,” said study co-author D.V. Chip Weseloh, a retired Great Lakes waterbird specialist with the Canadian Wildlife Service. “Pelicans are strange birds and will range far and wide hundreds of miles to feed,” a feat documented with radio transmitters.

With its 9-foot wingspan, the American white pelican is one of North America’s largest birds and feeds primarily on fish, according to the Audubon Society.

The overall population declined through the first half of the 1900s but has grown substantially since the 1970s. It’s protected under the Migratory Bird Treaty Act, and the International Union for Conservation of Nature’s Red List categorizes it as a species of least concern. 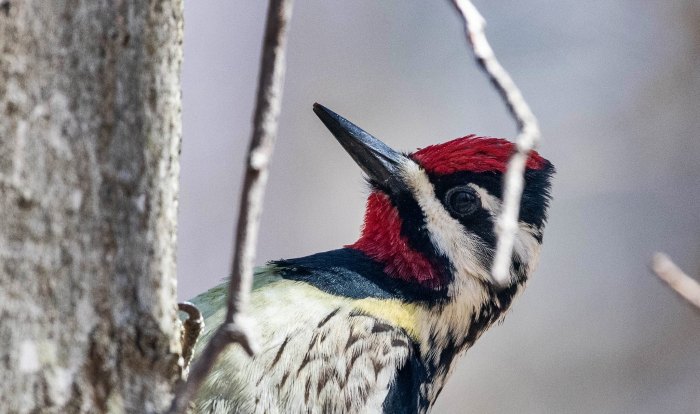 Eye of Reflection by Joshua DuPuis

I’ve always thought of this bird as an insult from Looney Tunes, but All About Birds from Cornell University explains that Yellow-bellied Sapsuckers:

…are fairly small woodpeckers with stout, straight bills. The long wings extend about halfway to the tip of the stiff, pointed tail at rest. Often, sapsuckers hold their crown feathers up to form a peak at the back of the head.

Yellow-bellied Sapsuckers are mostly black and white with boldly patterned faces. Both sexes have red foreheads, and males also have red throats. Look for a long white stripe along the folded wing. Bold black-and-white stripes curve from the face toward a black chest shield and white or yellowish underparts.

You can click through to All About Birds for more including videos & audio! Lansing-based Feed the Birds (who shares my Looney memories) adds:

Yellow-bellied Sapsuckers arrive back in mid-Michigan in April from their wintering grounds in the southern U.S., Mexico, West Indies, and Central America.

I’ve seen evidence of their presence before on the trunks of the pine trees. Sapsuckers tap for sap as their main food source. On my trees the sapsucker seems to like to drill patches of several shallow rows across and several shallow rows down. These neatly organized patches of holes well up with sap that the sapsucker laps up with their brush-like tongue (not sucks). He also eats any bugs that happen to get trapped in the sticky stuff.

These predrilled sweet sap sources benefit hummingbirds, waxwings, and warblers as well when they need a quick, sweet bite while traveling.

Joshua took this photo of a Yellow-bellied Sapsucker in Antrim County. Click to visit Joshua’s Flickr and use the > at the right of the photo to see several more shots of this lovely bird!

The All About Birds listing for Aix sponsa (wood duck) says in part:

The Wood Duck is one of the most stunningly pretty of all waterfowl. Males are iridescent chestnut and green, with ornate patterns on nearly every feather; the elegant females have a distinctive profile and delicate white pattern around the eye. These birds live in wooded swamps, where they nest in holes in trees or in nest boxes put up around lake margins. They are one of the few duck species equipped with strong claws that can grip bark and perch on branches.

Wood Ducks thrive in bottomland forests, swamps, freshwater marshes, and beaver ponds. They are also common along streams of all sizes, from creeks to rivers, and the sheer extent of these make them an important habitat. Wood Ducks seem to fare best when open water alternates with 50–75% vegetative cover that the ducks can hide and forage in.

More including wood duck calls at All About Birds.

Third Son took this yesterday – see more in his Birds 2020 gallery & definitely do yourself a favor and have a look at his most popular pics!

Many (many) more Michigan birds on Michigan in Pictures. 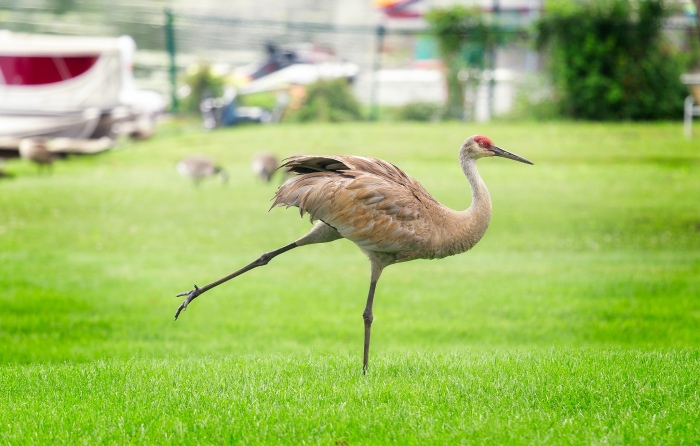 All About Birds says that the Killdeer (Charadrius vociferus) is shorebird you can see without going to the beach:

These tawny birds run across the ground in spurts, stopping with a jolt every so often to check their progress, or to see if they’ve startled up any insect prey. Their voice, a far-carrying, excited kill-deer, is a common sound even after dark, often given in flight as the bird circles overhead on slender wings.

Killdeer get their name from the shrill, wailing kill-deer call they give so often. Eighteenth-century naturalists also noticed how noisy Killdeer are, giving them names such as the Chattering Plover and the Noisy Plover.

The Killdeer’s broken-wing act leads predators away from a nest, but doesn’t keep cows or horses from stepping on eggs. To guard against large hoofed animals, the Killdeer uses a quite different display, fluffing itself up, displaying its tail over its head, and running at the beast to attempt to make it change its path.

The male and female of a mated pair pick out a nesting site through a ritual known as a scrape ceremony. The male lowers his breast to the ground and scrapes a shallow depression with his feet. The female then approaches, head lowered, and takes his place. The male then stands with body tilted slightly forward, tail raised and spread, calling rapidly. Mating often follows.

Love is in the Air, photo by Julie

Julie caught this pair of cardinals earlier this week. Definitely a lot of this going on out there!!

View the photo bigger and see more in her Birds slideshow.

I’m pretty sure that the bird John has captured so perfectly is a Great Egret. Fittingly, the egret tag on Michigan in Pictures includes another stunning photo by John of Great Egrets in flight along with all kinds of info about this beautiful bird.