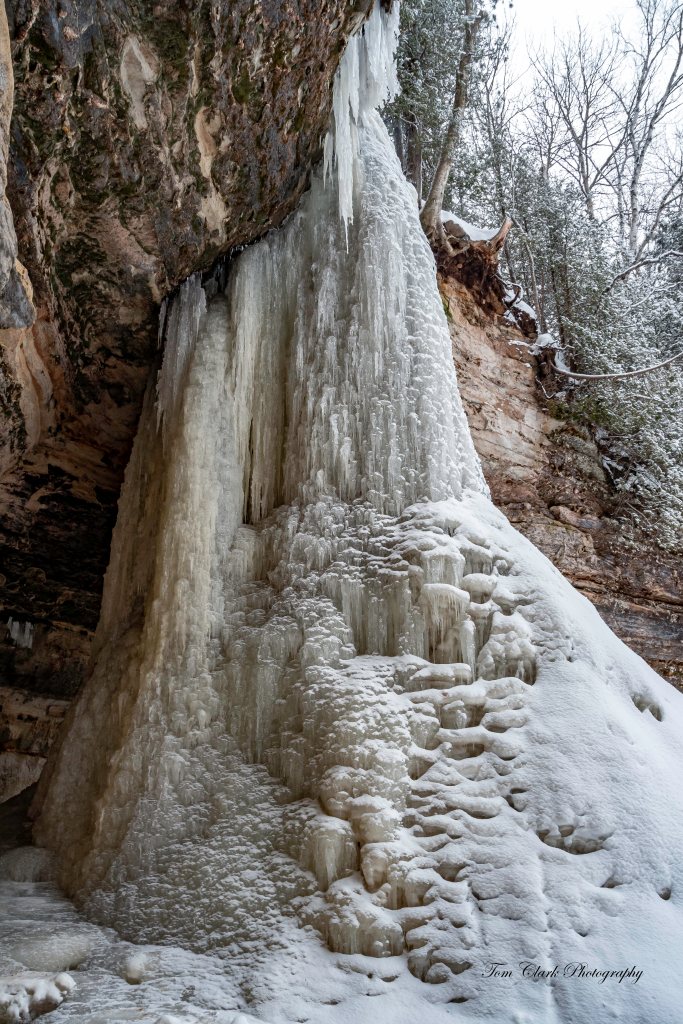 Tom took this shot last weekend at the 50-foot Munising Falls in the Pictured Rocks National Lakeshore. See more shots in Tom’s UP Trip for Ice 2-4-2022 album on Flickr & for sure zoom in for the crazy detail in this 5k photo! 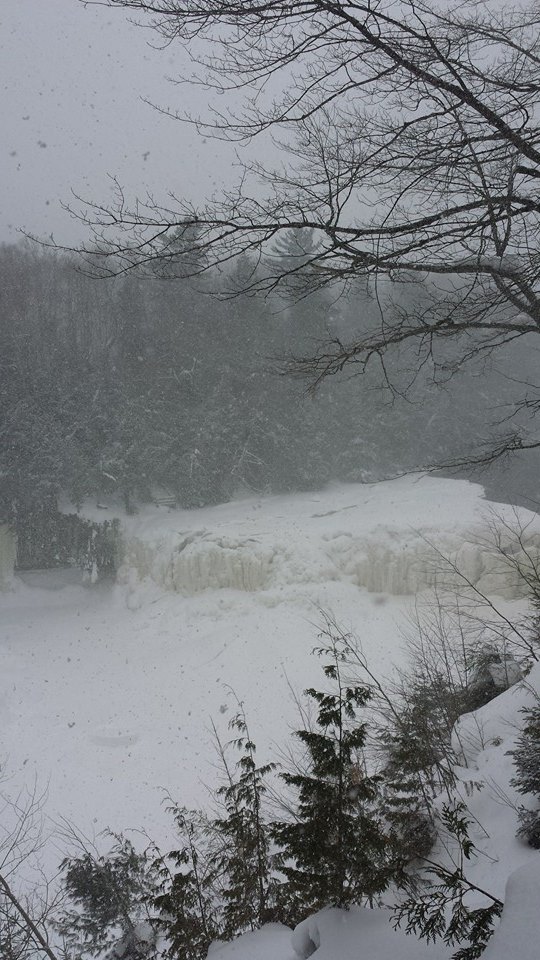 If you ever wanted to see the Upper Falls frozen, here is your chance! The water is flowing beneath the ice, but we have never seen the left side frozen over before. Pretty cool!

Click to see the photo bigger and to view other photos people took recently, check out several more shots of the falls as they’ve frozen on the Tahquamenon Falls State Park Facebook, and visit the Park’s page at Michigan.gov.

Lots more about the Tahquamenon Falls on Michigan in Pictures!

“Love lingers when the heart remembers to touch the light leaking from the soul.”
~R.M. Drake

Here’s a pretty incredible shot from Sunday in Frankfort Harbor.

In addition to being a pretty great photographer with a penchant for adventure, Sarah is an ambassador for Outdoor Bella, a community of strong women who are building strong relationships and lasting friendships and love to embrace the outdoors. She’s hosting a snowshoe hike meetup at 9:30am on Sunday, March 1st at the Sleeping Bear Point Trail in the Sleeping Bear Dunes National Lakeshore, followed by lunch at Art’s Tavern in Glen Arbor following the hike. Get all the details right here. 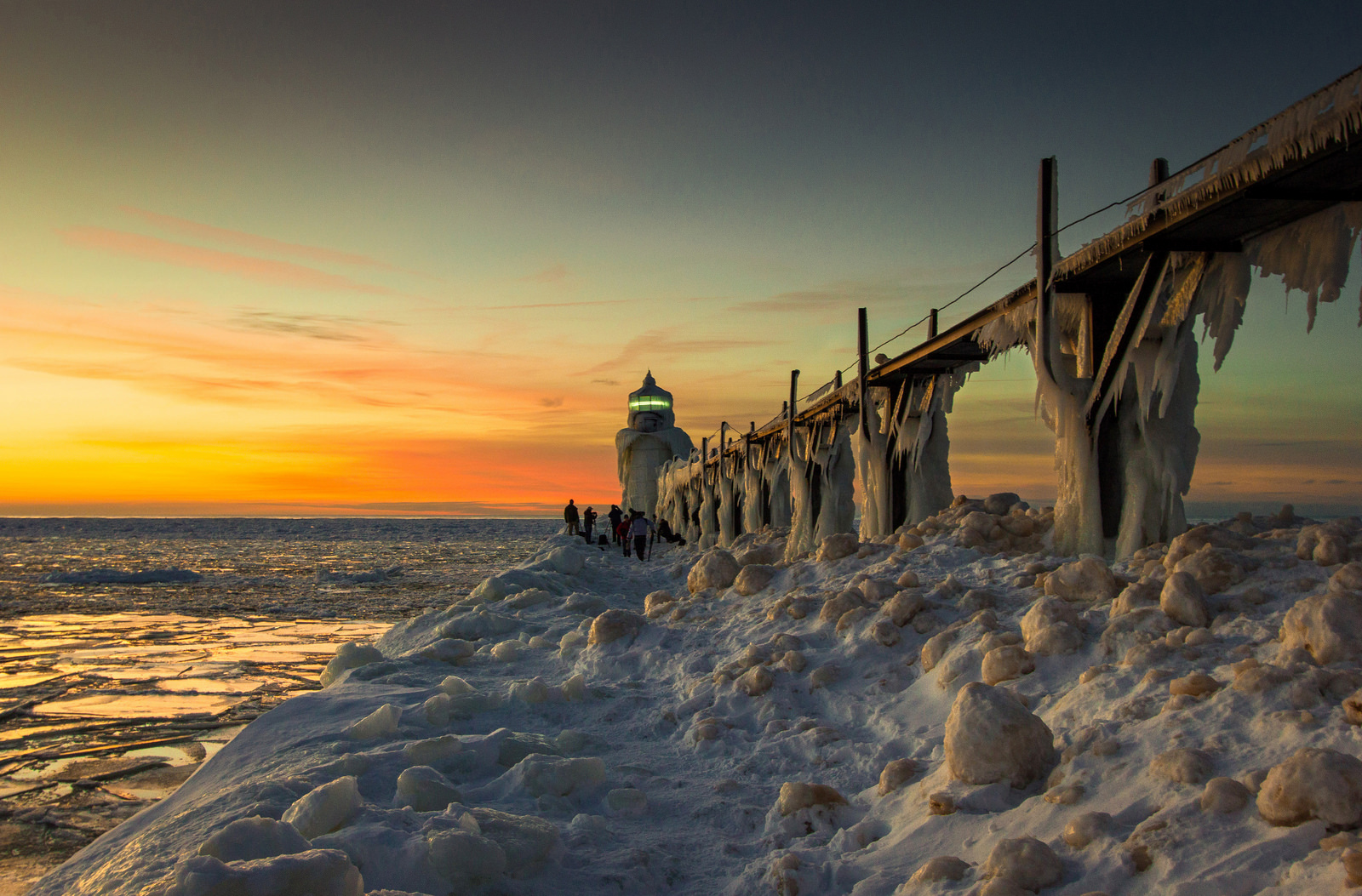 We’ve all been seeing a bunch of photos from the frozen St. Joseph Pier, so I thought it would be good to give you a little primer about which is which. It took a little digging, but Dave Wobster at Boatnerd.com has the best info on St. Joseph North Pier Outer & Inner Lights:

The present range lights were built in 1907 when the north pier was extended 1000-feet necessitating two lights which serve as range lights. Previously, there had been lights erected as early as 1832 at this location. A round stone tower, built in 1859, was replaced by the present lights.

Outer – (Front Range) is a round, cast-iron plate 35-foot tall tower topped by a round watch room and 10-sided lantern room. The tower is painted white, and the lantern room is black. The fixed light is exhibited via a Fifth-Order Fresnel lens and two brass reflecting panels manufactured by Barbier & Benard of Paris. The light is visible for 180 degrees. (above)

Inner – (Rear Range) was built in 1898 and rebuilt 1907. A 26-foot square steel-framed fog signal building encased in 3/8″ cast iron plates with an octagonal light tower on a hip roof. The helical bar lantern room contains a Fourth-Order fixed Fresnel lens with a brass reflector manufactured by Sautter & Company of Paris. The building is white with a red roof, and the lantern room is painted black. The light is visible over a range of 270 degrees. (below)

The lights are connected by an elevated catwalk that extends from the shore to the outer light. The walkway was constructed to permit the light keepers access to the light during rough weather. 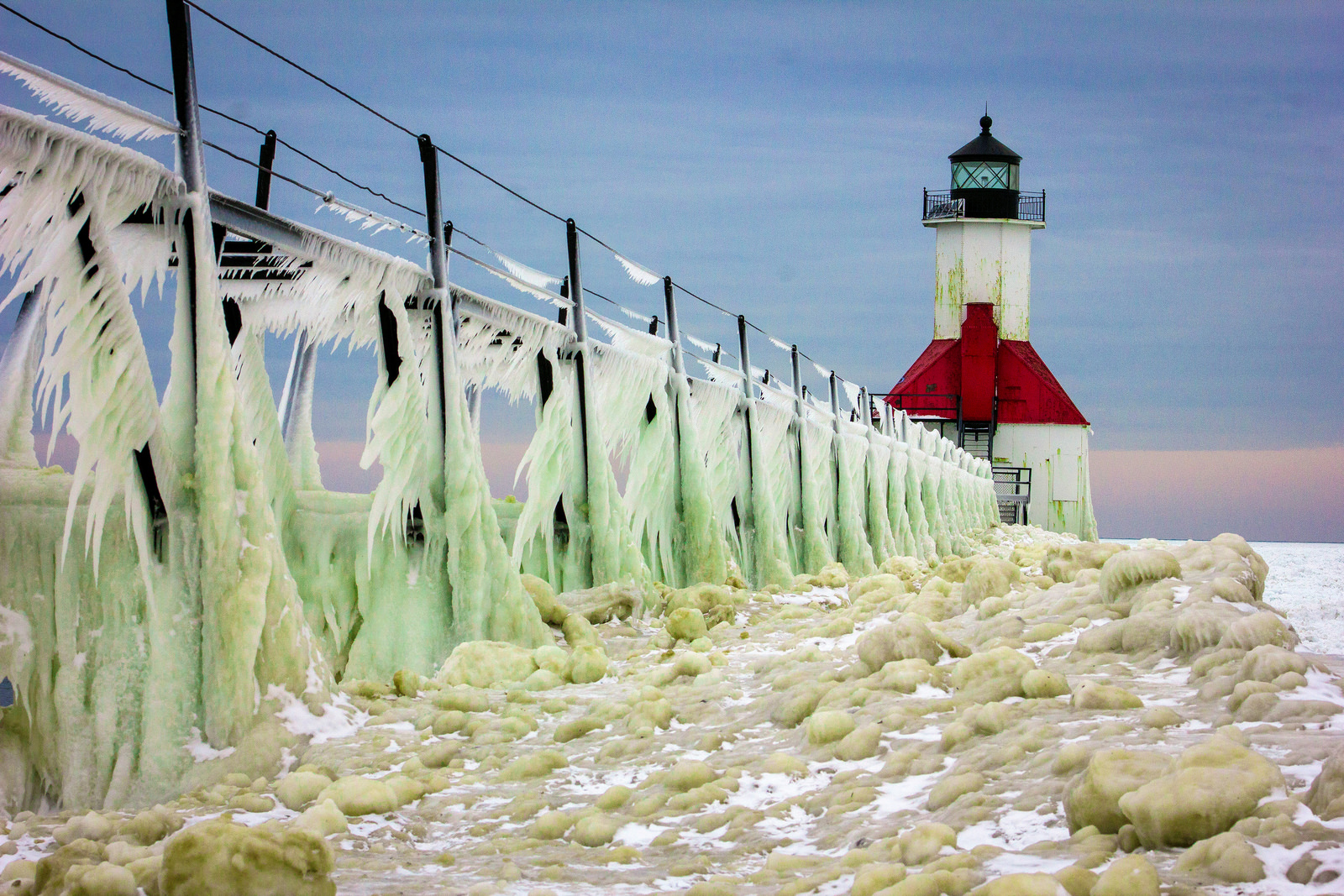 Aaron got a great pic of the mid-day December sun illuminating the ice-soaked plant life at the Point Betsie Light. 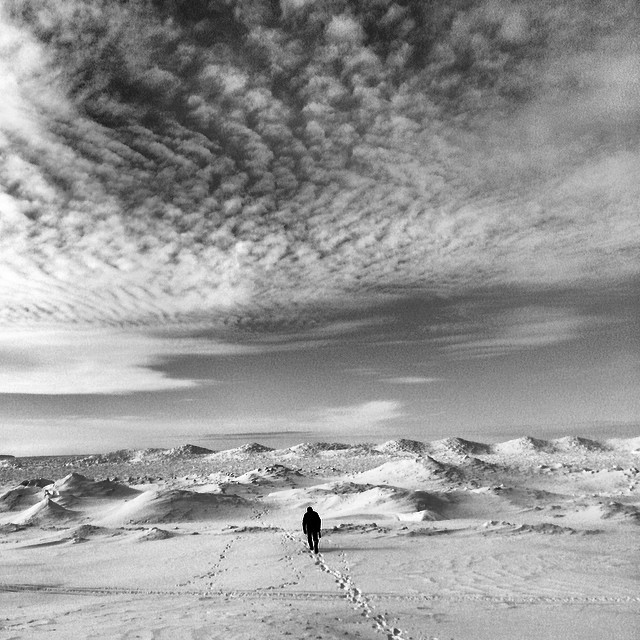 So much ice, everywhere, photo by caterleelanau

At night, as cold settles in, lake ice creaks and groans. It’s been excessively cold, and I camped exposed on the snow-swept surface. Other than the lack of vegetation and the sounds at night, you’d never know you were on a lake. It feels like an empty plain. In some places, you see pressure ridges where ice has pushed into itself, sticking up like clear blue stegosaurus plates.
~ Author Craig Childs on Lake Superior

From the latest satellite photo, it looks like Lake Huron is 100% frozen with Superior & Erie 95% and Michigan somewhere in the 85% area. Ontario is looking like the slacker right now, and you can follow along and see daily satellite shots from NOAA.

The NASA Goddard Space Flight Center provided the quotation above and reported on the Great Freeze Over the Great Lakes saying (in part):

Scientists say it’s understandable that the Great Lakes have had so much ice this year considering the cold temperatures in the region that persisted through the winter. Cold air temperatures remove heat from the water until it reaches the freezing point, at which point ice begins to form on the surface, explained Nathan Kurtz, cryospheric scientist NASA’s Goddard Space Flight Center in Greenbelt, Md.

“Persistently low temperatures across the Great Lakes region are responsible for the increased areal coverage of the ice,” Kurtz said. “Low temperatures are also the dominant mechanism for thickening the ice, while secondary factors like clouds, snow, and wind also play a role.”

The freeze this year has local implications, including possible changes to snowfall amounts in the Great Lakes area, explained Walt Meier, also a cryospheric scientist at NASA Goddard. When the lakes are primarily open water, cold air picks up moisture from the relatively warm and moist lake water, often resulting in lake effect snow on the lee side of the lakes, on the eastern and southern shores. When the lakes freeze, the lake effect generally shuts down. “Although this year, they’re still picking up a fair amount of snow,” Meier said.

Lake levels could also see an impact by summer, as winter ice cover generally reduces the amount of water available to evaporate during winter months. If that turns out to be the case, it would be “good news for local water supplies, as well as for shipping and recreational use,” Meier said.

A 2012 study in the Journal of Climate by scientists at NOAA’s Great Lakes lab, which included data from MODIS, found that winter season ice cover on Lake Superior has decreased 79 percent from 1973 to 2010. The study also showed that ice cover on the lakes is highly variable and difficult to predict.

Today’s photo was taken on frozen Lake Michigan off the Leelanau shore by my friend and neighbor Cammie, co-owner of Epicure Catering. You can follow her at caterleelanau on Instagram for lots of wintertime fun and summertime food!

More ice on Michigan in Pictures!