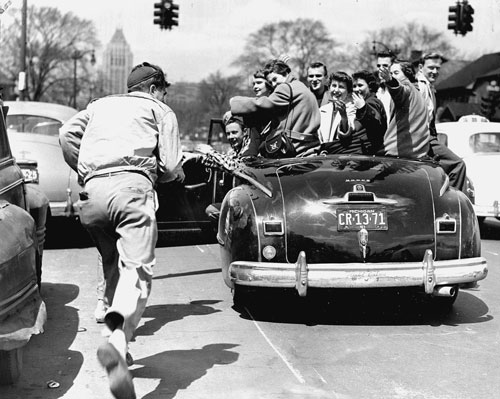 Cruising Woodward, 1951 (above) …the seriousness of the times (1950s) did not dampen a growing love of cars and the freedom experienced by driving them. These young Detroiters found their cars especially useful during the longest transportation strike in the city’s history. In April 1951, the folks here piled into a car not far from the Fisher Building, in the distance, which is across from the General Motors Building in Detroit’s New Center area. After the strike, Detroit mayor Albert Cobo urged the city council to sell Detroit’s streetcars to a willing buyer, Mexico City, for $1 million. The streetcars remained in service there until the 1980s. Detroit soon dismantled its trolley tracks, and only buses ran after that. Cars became the city’s major means of transportation.

Cruisin’ the Original: Woodward Avenue by Anthony Ambrogio and Sharon Luckerman begins: In the 1950s, cruising swept the nation. American streets became impromptu racetracks as soon as the police turned their backs. Young people piled into friends’ cars and cruised their main streets with a new sense of freedom.

Pent-up desires after the hardships of World War II plus a booming economy fueled a car-buying frenzy. To lure buyers to their particular makes and models, automobile companies targeted the youth market by focusing on design and performance. No place was that more relevant than on metro Detroit’s Woodward Avenue, the city’s number-one cruising destination and home of the world’s automobile industry. Barely 50 years earlier, Henry Ford rolled his first Model T off the assembly line at Piquette and Woodward, just south of where cruisers, dragsters, and automobile engineers ignited each other’s excitement over cars. This unique relationship extended into the muscle car era of the 1960s, as Woodward Avenue continued to reflect the triumphs and downturns of the industry that made Detroit known throughout the world.

The Totem Pole (right) was the cruisers’ unofficial starting point on Woodward Avenue at Lafayette Street, kitty-corner from the zoo. This 1957 photograph demonstrates the “proper” way cruisers parked—to see and be seen, backed in, like the finned Plymouth in the lower-left corner. (click photo for larger view!)

The Images of America series celebrates the history of neighborhoods, towns, and cities across the country. Using archival photographs, each title presents the distinctive stories from the past that shape the character of the community today. Arcadia is proud to play a part in the preservation of local heritage, making history available to all.

Cruisin’ the Original: Woodward Avenue is available from the publisher online at www.arcadiapublishing.com or by calling 888-313-2665.

View other excerpts from Arcadia Publishing’s Michigan books at Michigan in Pictures!

Here’s an action-packed feature on the Woodward Dream Cruise from Absolute Michigan!