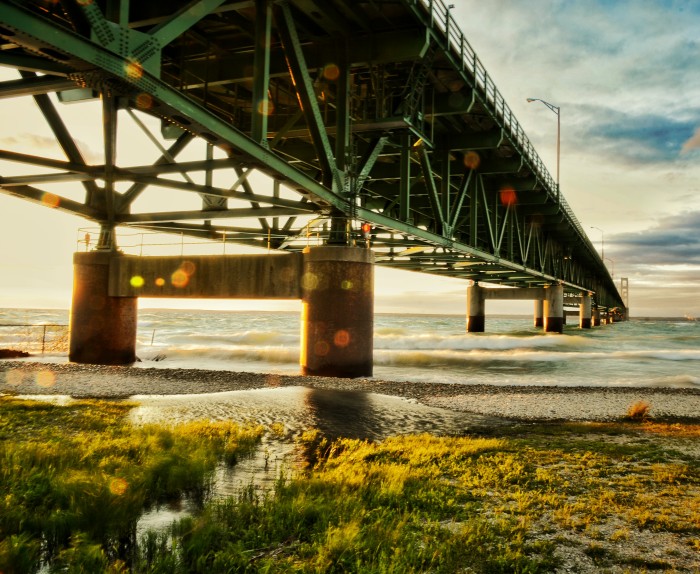 UP TV-6 shares that the Mackinac Bridge Authority is expecting about 20,000 crossings of the bridge this weekend, about the same as 2021. Whether you’re traveling or staying put this weekend, I hope you have a good one & remember those who have put their lives on the line for this country.

Greg took this photo back in 2016. See more in his Print gallery on Flickr.

Lots more about the Mighty Mackinac Bridge on Michigan in Pictures. 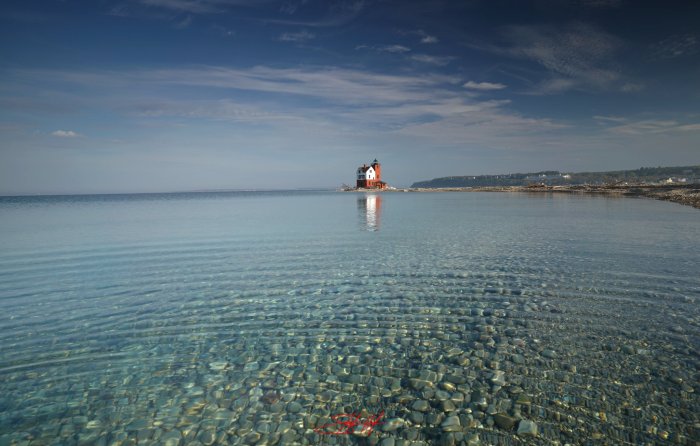 Round Island Light 2022 by S.Hughes Photos

“We are here but for a second, but our impact ripples through time.”
― Neetal Parekh

The Wilderness Connect entry for Round Island says in part:

The United States Congress designated the Round Island Wilderness in 1987 and it now has a total of 375 acres.

All of Round Island has been designated wilderness except one acre on the northern tip, a sand and cobblestone spit where the lighthouse stands. There has been no logging on the island since the turn-of-the-century. There are no docks, roads, or developed hiking trails on the island. Access is by boat in the summer and over ice in the winter. Several historic and prehistoric sites exist on the island.

…The “Michigan rattler”, massausauga has been rumored to reside on the island. You may see whitetail deer, raccoon, red squirrel, fox, rabbit, and an occasional black bear on the island; as well as a variety of songbirds and waterfowl. Trout, pike, salmon, and other freshwater fish are found in the lake waters around the island. While the island is removed from the hustle and bustle of everyday life, it is close enough that you can see busy Mackinac Island and the mainland lights.

More information about the Round Island Wilderness Area from the US Forest Service.

While I’ve shared a number of photos of the Round Island Lighthouse taken from the Mackinac Island Ferry over the years, I’ve never seen a shot from taken from on Round Island! Follow S. Hughes Photos on Facebook for lots more. 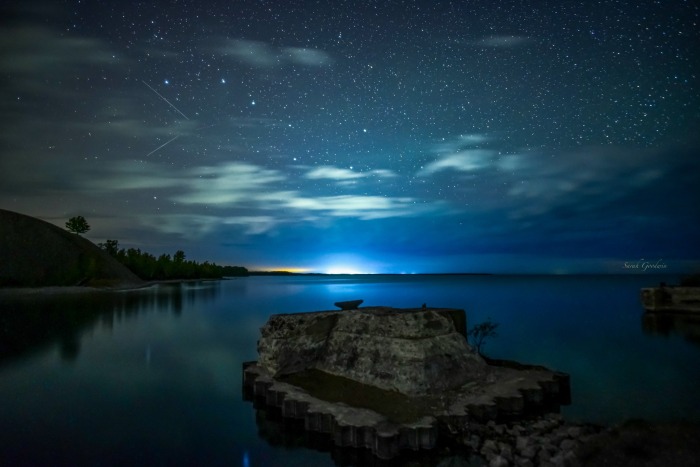 Michigan State Parks, Trails and Waterways shared this photo from the Rockport State Recreation Area, asking: What are you doing to do to celebrate #InternationalDarkSkyWeek?

In addition to these dark sky preserves, there are two dark sky parks in Michigan:

And if that’s not enough, there is also plenty of excellent night-sky viewing opportunities across more than 15,000 square miles in Michigan’s Upper Peninsula. For more details, visit Michigan.gov/DarkSky.

Sarah is a Michigan State Parks Photo Ambassador, and you should definitely check out her website where you can view & purchase her work as well as her Facebook & sg.captures on Instagram! 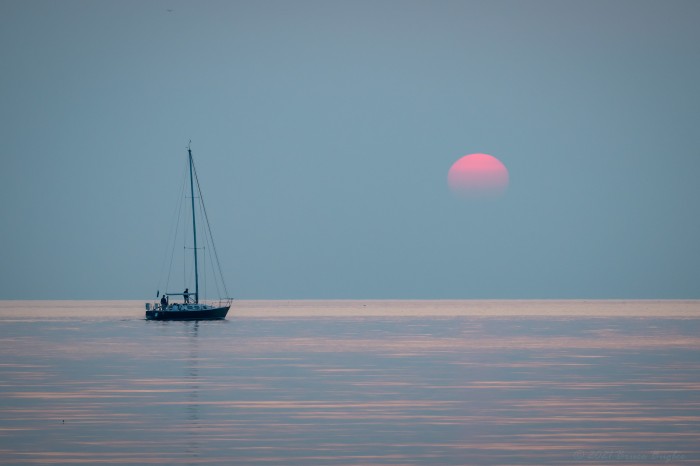 Is this winter wearing on anyone else? If so, I invite you to sail to summertime with me on this sailboat that Bruce photographed in July 2021 on Lake Huron. He shares:

It was a hazy summer morning in St. Ignace, Michigan, giving a unique hue to the sky and sunrise. The haze was created by the wildfires in Ontario and out west. Captured a sailboat drifting by the red rising sun on a very calm and peaceful Lake Huron. 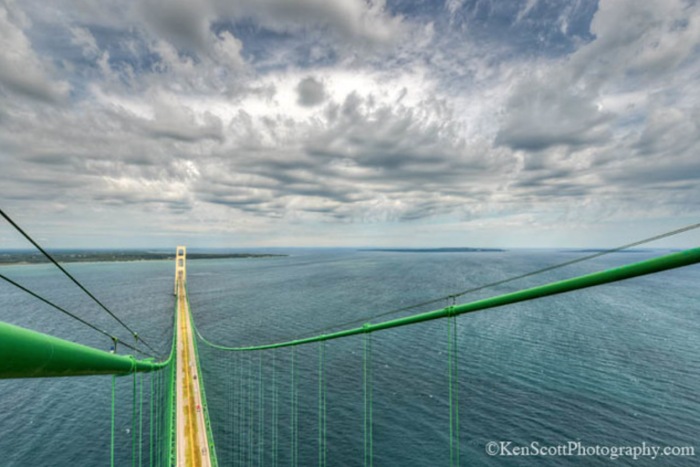 On Saturday, the Michigan Wolverines defied recent history and absolutely thrashed the Ohio State Buckeyes 42-27 in the Big House. While this is certainly a huge victory by Michigan over Ohio, it pales in comparison to one the greatest fleecings in history, the trade of the 468 square mile Toledo Strip for the entire Upper Peninsula. Not bad eh? Read all about it in Michigan, Ohio & the Best Worst Deal Ever on Michigan in Pictures.

Ken took this photo looking north at a portion of Michigan’s haul from one of the towers on the Mighty Mac with St. Ignace, Mackinac Island and Round Island on the horizon. See more in his Mackinac Stuff gallery on Flickr & for sure view and purchase his work at kenscottphotography.com 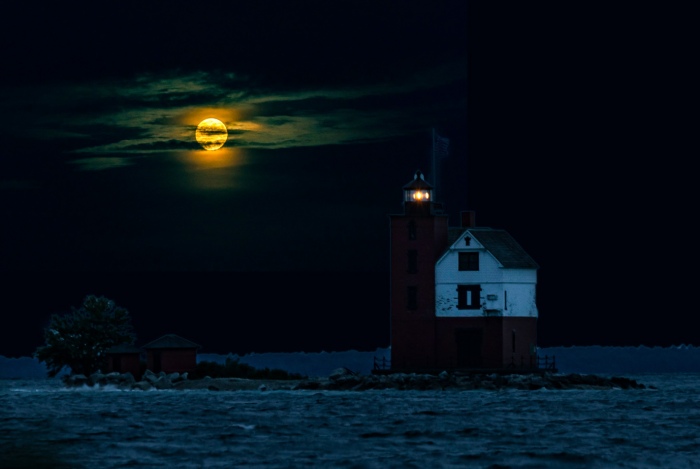 Round Island Light, with a  little moon added for effect by Tom Clark

Tom’s shot of Round Island Light off Mackinac Island just might be the most Michigan Halloween photo ever. See more in his Night scenes & after dark images gallery on Flickr & head over to Tom’s website to explore his photos.

If you want a spooky lighthouse, check out The Haunting of the White River Light on Michigan in Pictures & happy Halloween everyone!! 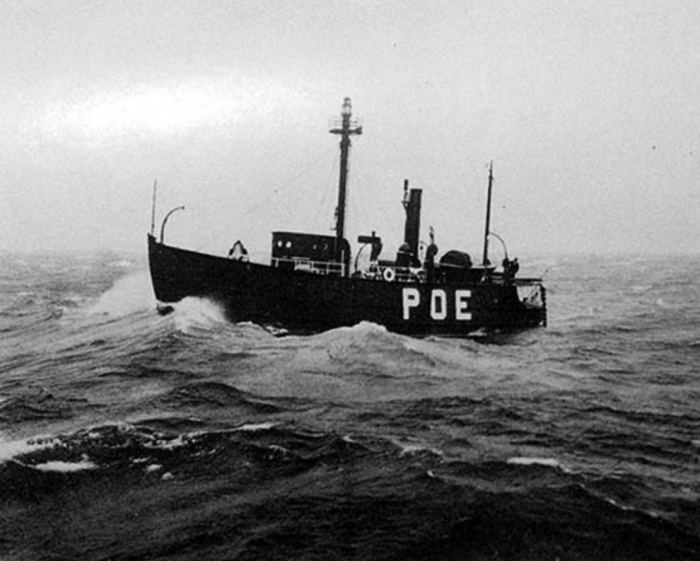 In 1892 two contracts totaling $55,960 were awarded to the Craig Shipbuilding Company in Toledo for the construction of four lightships. Designated as Lightships LV59, LV60, LV61 and LV62, all four vessels were built to similar specifications. Framed and planked of white oak they measured 87′ 2″ inches in length, 21′ 6″ inches in the beam, with a draft of 8 feet. In a cost-cutting effort, the vessels were un-powered, outfitted with only a small riding sail carried on a short after mast. Equipped with a cluster of three oil-burning lens lanterns hoisted on their foremasts, each was also equipped with 6″ steam whistles and hand-operated bells for fog use. Work was completed on the four vessels the following year, and after sea trials, all four were commissioned by the Board and placed into service, LV59 being assigned to Bar Point, LV60 to Eleven Foot Shoal, LV61 to Corsica Shoal and LV62 to Poe Reef.

With the words POE REEF brightly painted in white on her fire engine red hull, LV62 was towed to Poe Reef by the lighthouse tender Marigold, and anchored on station to begin her vigil on September 29, 1893. For the next seventeen years LV62 spent every shipping season faithfully guarding the shoal. With the end of each shipping season, one of the lighthouse tenders would make the rounds of all lightship stations in the Straits area, and tow them into Cheboygan harbor for winter lay-up. While in Cheboygan, necessary repairs and improvements would be made in preparation for the following season. At some time in March or April, the ice would break up sufficiently to allow the vessels to be towed back to their stations to stand guard for yet another season.

Head over to Seeing the Light for more about Poe Reef Lighthouse & the stories of all Michigan’s lighthouses compiled by a champion for their preservation who has gone too soon.

On September 20th way back in 1873, the beacon of the the St. Helena Island Lighthouse was lit for the first time. CMU’s Clarke Historical Library explains:

Because several ships had been wrecked on the dangerous shoals near the island of St. Helena in 1872, Congress authorized construction of a lighthouse at the southeast tip of the island. Since September 20, 1873, the beacon of the St. Helena Lighthouse has helped guide vessels safely through the Straits of Mackinac.

The light was first automated in 1922 and the modern lighthouse uses solar batteries to power the light.

In 1988, the lighthouse was added to the national Register of Historic Places. Recently restored to excellent condition by the Great Lakes Lighthouse Keepers Association, the St. Helena Island Lighthouse continues to light up the Straights and provide a glimpse of the golden age of the Great Lakes’ lights.

Definitely check the Clarke Historical Library out – some great Michigan history there for sure!

More lighthouses on Michigan in Pictures! 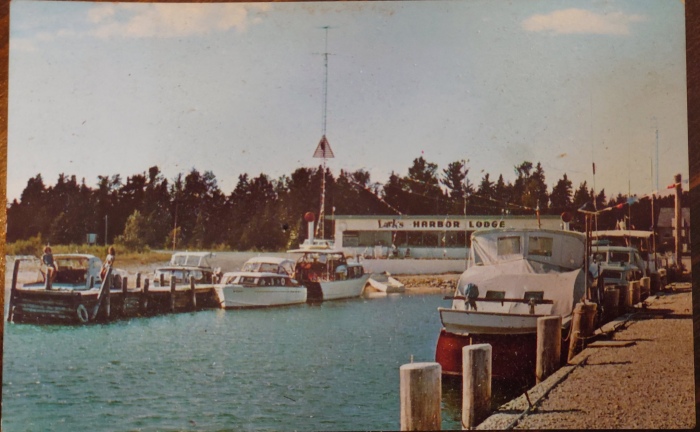 There’s some names that you see again & again in Michigan. One of these is “Presque Isle”. It means “almost island” in French so you can see why Michigan’s peninsula right coastline brought that to the minds of early French traders.

Check out the US-23 Heritage Route for more great summer touring options along this northeast Michigan highway!

John shared this cool photo of Presque Isle Harbor during the age of wooden boats. Check out his mix of old & new pics on his Flickr. 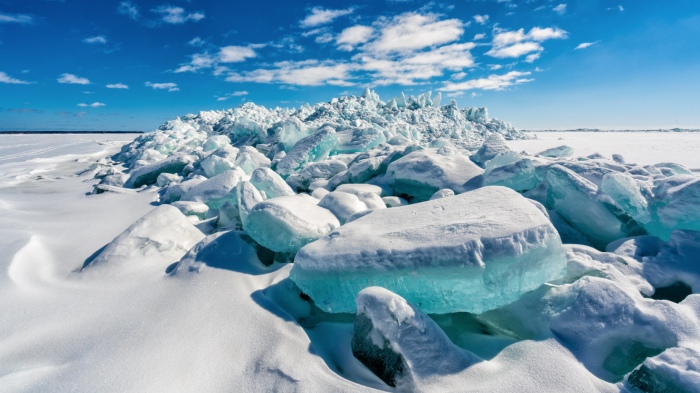 There hasn’t been much in the way of ice buildup yet on Michigan’s Great Lakes so far in 2021, so I decided to reach back a couple of years to March of 2019 for this beauty from Au Gres on Lake Huron. The Causes of Color answers the question what causes the blue color that sometimes appears in snow and ice?